Life, Liberty, and the Pursuit of Fabric... Welcome to the Patriotic Quilter where I like to share all things quilty as well as red, white, and blue! Please feel free to look around and enjoy yourself! I would love to hear from you.

Goodness, I'm a day late and a dollar short posting this!  Spring is upon us and I've been doing lots of gardening, yardwork, and babysitting recently and that is keeping me from stitching as much as I like!  Oh well, soon the heat will keep me inside in my sewing room.

The last post I shared detailed the quilt I made for the Reproduction Doll Quilt Swap hosted by Lori at Humble Quilts.  Making and sending a quilt off is lots of fun, and next was the true excitement when the mail came each day to see if my quilt was there.  Finally, one day, my husband brought in the mail and there was a package for me!  I confess, I was so eager to open it and see what it was that I didn't even hear him telling me about his day.  I think he was a bit miffed at me about that, but frankly, non-quilters just don't get it...

Anyway, what came out of the package was simply stunning!

This totally gorgeous quilt, plus some fabric, a pattern, and some awesome RWB measuring tape ribbon bundling it all together.

The quilt is so fun.  I'd never seen any pattern like it before--it reminds me of houses.  Just a few days later, though, I was looking on Amazon and they had "recommended books" for me to look at.  One was this:

It's the pattern, or at least the inspiration, for my quilt!  It was like recognizing an old friend.

Meanwhile, lets take another look at mine.

I made the photo as large as possible so you could see the gorgeous backing fabric.  I love the label as well.

I've shared the quilt, but I've not told about the very talented creator.  My swap partner was Patricia Riley, owner of Prairie Hill Retreat in Janesville, Wisconsin.  She included a brochure for her retreat center and it looks like a wonderful place to go with friends to quilt.  If you are interested, it is on Facebook.

I wanted to write this post yesterday when Lori put up the linky party, but I had plans to be down in Indianapolis to garden with my daughter.  We had a lovely day and the weather was perfect, so it was more yardwork last night when I got home.  My husband and I are in the process of building a raised-bed 4 feet wide by 20 feet long so I have lots more room for dahlias this year.

Have a wonderful day!
JoAnne
Posted by JoAnne 58 comments:

Last year I participated in the reproduction doll quilt swap hosted by Lori at Humble Quilts.  So when she announced that she was doing another, I eagerly signed up.  The rules are that it cannot be larger than 24" on a side (can be square or rectangle,) and has to be made with reproduction fabrics, prior to the 1920s.

I decided that I would try to replicate some or part of a real antique quilt and since I needed to start my search for a quilt somewhere, I chose to search for Indiana antique quilts, since Indiana is my new, adopted state.  I stumbled across this one, found here.

It's in my favorite colors!  And I love to make flying geese.  Lets look a bit closer.

That's a bit better--although I should have cropped the pictures maybe--but you get the idea.

I decided to make a piece of the quilt--pretty much as shown in the photo just above.  To make it, I needed a LeMoyne star block for the center and then lots of flying geese.

I tried to see how they would fit together and I realized I needed a LeMoyne star block that was a half inch larger than the first one.  I went back to the ruler and was momentarily stymied by the fact that it increased only in inches.  I considered for a short time and then decided to attempt to make it only a half inch larger by imagining a line exactly between the ones on the ruler.  It worked great!  Next, I started making more geese.

I laid out the units I would need to make a square.  I didn't like it, though, it looked like a block from a larger quilt.   I decided to add more geese to stretch it into a rectangle, so I made more geese.

Yes, I had to use "Y" seams to construct the top, but they really aren't that scary!  I find that as long as I mark the quarter inch intersections, they go together easily.  The result was as you see above, but I wanted a border.

I decided to continue with the flying geese and use them as a border, so I made more geese.  I laid out several possibilities and decided that I wanted each border to have the geese pointing to the center, so I would need an even amount on both the top/bottom and the sides.  Like this:

Of course, the center wasn't the right measurements for the border, so I had to add some skinny strips all around to "float" the center and bring it to the right measurments.  I sewed geese together to form the side borders and discovered I needed more, so I made more geese.

My next dilema was the corner squares.  Should they be navy or cream?  I thought they should be navy, since in the antique quilt, there are navy squares that appear where the geese meet, however on my smaller version, they just "boxed" the center too much.  I loved the inspiration quilt as it was so "airy" and "unconfined"  and it didn't have a heavy border surrounding it.  So in the end, I chose cream for the corner squares.

Last year, I designed a quilt for the swap and ended up not sending it out,  (I sent another in its place.)  Why?  I had machine quilted it by meandering over the top.  I personally thought it detracted from the "antique" look that we are striving for.  I don't object to machine quilting at all--but to me, the meander didn't look authentic.  I considered my options for this top and decided to hand quilt it.

I haven't hand-quilted in a while, so I had to get back "in the groove."  I really enjoyed it, too!  I used to do lots of hand-quilting but haven't lately.  I wonder why?  I suppose because I'm doing lots of other hand work--needle turn applique and wool applique.

It didn't take too long and it was finished.  I bound it in red and washed it to get the lovely "crinkle."

It's going to be difficult to send this out!  I'm proud of the fact that I didn't use a pattern and I had the technical skills to see how it was constructed and then make my own version.  I need to do that more often!  I named it "Indiana Crossings" not just because the lines of geese criss-cross acosss the quilt, but also because Indiana is know as "the Crossroads of America" as so many freeways travel across our state.

This is the back--I love the texture of the hand-quilting!

I'll send this off later this week.  The deadline is May 1, but I know this has a long journey.  I can't wait to see the one that arrives in my mailbox!

Have a great day!
JoAnne

Spell it with Fabric 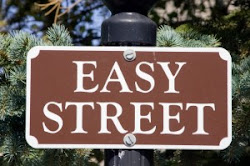 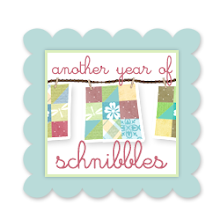